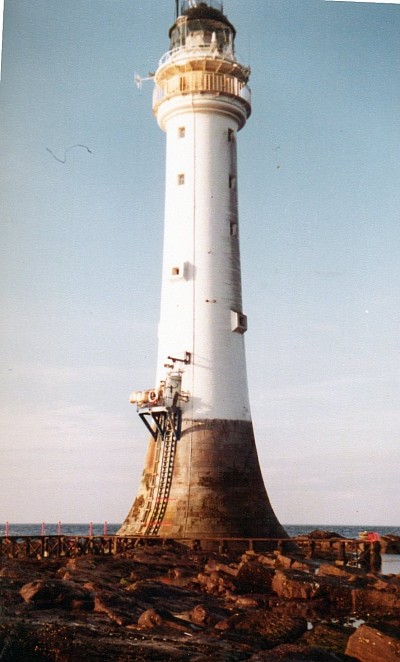 The Bell Rock Firth of Forth

Here we have a small offering of bygone days in the Northern Lighthouse Service before the time of Facebook and Twitter and all the fancy ways of communication these days albeit I'm using one at the moment, these ramblings started back in the 1990s on one of these wet miserable evenings when I decided to make a small site about some of my days in the service which I started then forgot about, then when we moved house I came across  that old floppy disk and here is the result, the following  is not for the diehard enthusiast but more for someone with a passing interest and a spare fifteen minutes while waiting for their favourite soap to air I served in the Northern Lighthouse  Service  from 1978 untill my redundancy  in 1998 due to the automation of the lights , the service covered the whole of Scotland and the isle of man , when I joined in seventy eight technology was just making its way into the service so I saw some of the old ways and the up and coming of the new ways and thankfully missed the hard times especially the time spent on rock lighthouses, for keepers had to endure six weeks offshore  and two weeks  home with there families and that's if the weather  permitted a boat relief if not that would be them stranded till the weather abated, you had to be hardy and mentally strong in those days I would imagine I remember even in my early days on mornings of the relief checking the landings for swell and radioing ashore to the boatman as to whether the relief was on or had to be abandoned till the next morning what did make a huge difference was the change to month on, month off and the advent of  the helicopter reliefs. but to be honest even a month on the rocks especially in the winter months when your couped up inside because of weather conditions  and then when you did venture outside for maintainance etc. you had to wrap up well to say the least, a month could seem an eternity, of coarse the flip side was the summers with beautiful sunrises and sunsets and clear nights looking to the stars and with no light pollution the longer you looked the more and more stars just kept appearing obviously like any job it had its up and downs especially when my children were young and you don't really realise just how quickly they grow up, time you will never get back, on one occasion on relief day my youngest daughter was asked where is you daddy going the reply was the lighthouse to make pennies, there even  at few years of age she already had a handle on how the world works, she now works in the oil industry the economic driver of the world somethings never change, I have spent time on many lighthouses be it as a supernumerary, a keeper or as relieving keeper all in all a very good selection of stations including the pillar lights like the bell rock and skerryvore, what I can say about the job is it certainly was an experience and I have seen many things in nature be it wildlife, weather phenomenon, the traits in human nature or just the sheer beauty of Scotland, is something  that I am very privileged to have experienced especially being a city boy. which station stands out for me, that’s easy Muckle Flugga in Shetland what an eye opener, where was I the happiest that’s easy too St Abbs Head in Berwickshire with the keepers and their families at that posting.

Please click on photo's to enlarge, some will be pixelated as they are very old and of low resolution